Zinc oxide (ZnO) thin films were deposited on glass substrates through spin coating technique. Zinc acetate dihydrate, monoethanolamine and 2-methoxyethanol were used as the starting material, stabilizer and solvent, respectively. The effect of precursor concentration on the structural, optical and electrical properties of ZnO thin films is investigated. The X-ray diffraction studies reveal that all the films are polycrystalline in nature with preferred (002) orientation with crystallite size ranging from ~25 to 32 nm. Atomic force microscopy images infer the columnar growth of the films. From the optical measurements it was found that there was a marginal decrease in the band gap energy with increase in molarity up to 0.7 M. Optical constants and thickness of the films were found with the help of Swanepoel envelope method and were verified through ellipsometric measurements. Electrical resistivity of the grown films was found to be in the range 29–244 Ω cm, with a lowest value obtained for the films grown at 0.7 M. Carrier concentration of the grown films has also followed a similar trend. On the other hand, the Hall effect mobility (~400 cm2/Vs) was highest for the films grown at 0.7 M. Such high values make these films potential candidates for photovoltaic and display applications. 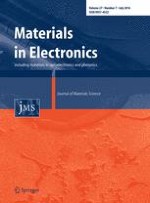 Synthesis and characterization of PTP/K[Fe(CN)3(OH)(en)] nanocomposite: study of thermal, electrical and photocatalytic properties