A method is presented by which time series analysis is applied to support groundwater system conceptualization and provide calibration targets for a steady groundwater model. The method is demonstrated for heads measured in the vicinity of a drinking-water well field. The estimated steady response to pumping was used to classify the monitoring wells as semi-confined or phreatic. Based on this conceptualization, the aquifer system was represented by two layers separated by a leaky bed, which represents the resistance to vertical flow of the layers. The model could be calibrated satisfactorily using the drawdowns estimated by time series analysis. This approach was more successful than deriving the aquifer parameters directly from the analytical well function of Hantush, which was successful for a limited number of monitoring wells only and required the a priori choice of the elevation of a confining layer which was not clear from bore logs. This study shows that time series analysis can lead to qualitative and quantitative insights regarding the local hydrogeology, providing complementary information to available bore logs to design a conceptual groundwater model. Time series analysis provides a cost-effective alternative to pumping tests when measured head fluctuations influenced by pumping wells are available. 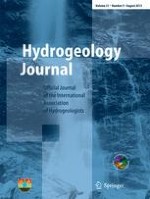 Satellite earth observation as a tool to conceptualize hydrogeological fluxes in the Sandveld, South Africa

Recharge assessment in an urban area: a case study of La Plata, Argentina

Reply to Comment on “Spatio-temporal variation of groundwater recharge in response to variability in precipitation, land use and soil in Yanqing Basin, Beijing, China”: report published in Hydrogeology Journal (2012) 20:1331–1340, by Huili Gong, Yun Pan and Yongxin Xu

The distribution of groundwater habitats in Europe