Changes in formaldehyde emission guidelines led to changes in the resin formulation. These changes include reduced formaldehyde to urea molar ratio which is followed by a change in reactivity of aminoplastic resins. This resulted in an increased occurrence of an undesired type of tack, herein called “sticking”, which causes addition of resinated wood particles onto machine parts in industrial particle board production. Whereas tack measurements for pressure-sensitive adhesives, such as the probe tack test and rolling ball test exist, mature cold tack tests for liquid formaldehyde-based resins are rare. Practical tests such as “finger-dipping” show limitations in terms of reliability and reproducibility. To measure the sticking behaviour, a rheometer test method is enhanced and modified to quantify influencing factors. The test set-up on a Bohlin CVO rheometer consists of a rotating cylinder which runs over a wood surface coated with resin. The established “glue line” dries out and partially cures, while the torque increases up to a maximum point. This change, caused by “sticking”, is accurately measured and recorded. Influences of different surface temperatures can be observed: the higher the temperature, the faster the drying. In addition, resin age significantly contributed to the sticking effect. Although changes in viscosity are only minor, the torque is highly influenced by resin age, both in measuring time and maximum. Besides temperature and resin age, this method might be useful to describe and investigate further factors influencing sticking issues occurring in the board production process, such as humidity, resin composition, material and surface roughness. 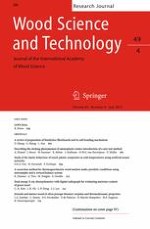 Molecular docking insights into the inhibition of laccase activity by medicarpin