» Jetzt Zugang zum Volltext erhalten
Wichtige Hinweise
Translated from Problemy Prochnosti, No. 2, pp. 89 – 98, March – April, 2018.
To describe the kinetics of short surface crack nucleation and growth in metals and alloys, an approach has been developed, which is based on deformation curves in the low-cycle fatigue region. In view of the known Ramberg–Osgood stress–strain relationship, the deformation fatigue curves have been replaced by traditional fatigue curves. Analysis of known experimental data shows that the kinetics of short surface fatigue crack initiation and growth can be described by the parameters of fatigue curves for both the low- and high-cycle fatigue region, which makes such results more informative. 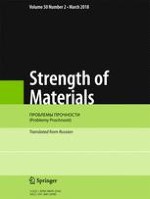