A structure for a piezoelectrically actuated capacitive RF MEMS switch that is continuously variable between the ON state and the OFF state has been proposed. The device is based on variable capacitance using a cantilever fixed at both ends that is actuated using a lead zirconate titanate thin film. Because the device is contactless, the reliability issues common in contact-type RF MEMS switches can be avoided. A comprehensive mathematical model has been developed in order to study the performance of the device, and allow for design optimization. Electrical measurements on test structures have been compared with the performance predicted by the model, and the results used to design a prototype RF MEMS switch. The model and simulations indicate the proposed switch structure can provide an insertion loss better than 0.7 dB and an isolation of more than 10 dB between 6 and 14 GHz with an actuation voltage of 22.4 V. The state of the device is continuously variable between the ON state and the OFF state, with a tunable range of capacitance of more than 15\(\times \). 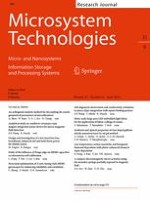 Performance optimization of microreactors by implementing geometrical and fluid flow control in the presence of electric field: a computational study