Designing low density polymeric porous materials with defined pore sizes (diameters in the 100 nm range) still remains a real synthesis challenge. Here, for the first time, we present a strategy by which bicontinuous microemulsions are used as templating agents for the in-situ aqueous polycondensation of organic resins (melamine formaldehyde, MF). The behaviour of surfactants with different head-groups in systems including oil and MF-containing aqueous phase is studied. While many surfactants are not compatible with aqueous MF precondensates, here we report a non-ionic surfactant either used solely or along with anionic surfactants which prove to be successful at keeping bicontinuous microemulsion systems homogeneous even during early stages of polymerisation. However, upon acid-catalysis it becomes clear that the pore structure of the organic material is largely controlled by the kinetics of phase separation due to the sol–gel process rather than by the thermodynamic equilibrium of the template (microemulsion). Indeed, despite numerous attempts, stabilising the microemulsion interface with zero curvature (bicontinuous) has remained problematic. Instead, we show a new behaviour for the MF resin whereby non-spherical MF morphologies (i.e. thread-like structures) can be obtained by specific interactions between the aqueous amino resin and the acid counterions. 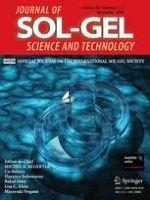 Syntheses of linear ethoxysiloxanes by the oxidative condensation of triethoxysilane