This paper proposes anti-windup proportional integral controller to deal with generation rate constraint problem during a frequency load control. An interconnected two-area power system is used by considering nonlinear constraints for thermal and hydro units combined with dish-Stirling solar thermal system (DSTS) in the first area, the nuclear power plant in the second area, and HVDC link in both areas. The imperialist competitive algorithm was used for optimal adjustment of parameters of the proposed controller. Simulations are performed in different scenarios. The proposed control scheme is compared with conventional PI controller; the effect of the presence of DSTS and HVDC link is investigated, and finally the robustness of the proposed controller against uncertain load is studied. The comparisons are made by using various performance factors of the system response such as overshoot, settling time and rise time. The results show a significant improvement in the system response and reduction in oscillation frequency of the areas and the power of the tie-line. 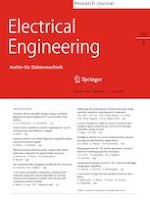