Precise positioning and repeatability of movement for stepper motors require designing a robust control system. To achieve that, an analytical model of a four-phase variable reluctance stepper motor is presented. A proposed open-loop driving circuit is designed to control the motion of a variable reluctance stepper motor. The driving circuit has an ability to drive the motor into two-step angles, i.e. a full step (15\(^{\circ })\) and a half step (7.5\(^{\circ })\). The direction of movement can be either into clockwise or counterclockwise direction. The operation of the variable reluctance stepper motor in an open-loop control circuit has demonstrated disadvantages of an oscillation and a relatively high settling time. Therefore, a closed-loop control circuit has been introduced using fuzzy logic control to overcome the oscillation problem and to obtain on a precise positioning within a reasonable settling time. The fuzzy logic control is used to improve and enhance the behaviour of the step position response based on oscillatory response and hence to reduce the overshoot significantly. The comparisons between the open- and closed-loop circuits are presented to demonstrate the disparity between both control circuits. The simulation results of the open-loop and the closed-loop circuits show that the time responses have been improved using different loads conditions. The simulation experiments are conducted and investigated using MATLAB–SIMULINK software package. 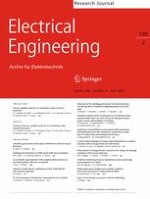