This study introduces a new sample that links people and families across 1860, 1880, and 1900 census data to explore the intergenerational impact of slavery on black families in the United States. Slaveholding—the number of slaves owned by a single farmer or planter—is used as a proxy for experiences during slavery. Slave family structures varied systematically with slaveholding sizes. Enslaved children on smaller holdings were more likely to be members of single-parent or divided families. On larger holdings, however, children tended to reside in nuclear families. In 1880, a child whose mother had been on a farm with five slaves was 49 % more likely to live in a single-parent household than a child whose mother had been on a farm with 15 slaves. By 1900, slaveholding no longer had an impact. However, children whose parents lived in single-parent households were themselves more likely to live in single-parent households and to have been born outside marriage. 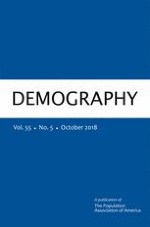 Prenatal Exposure to an Acute Stressor and Children’s Cognitive Outcomes

Living on the Edge: Neighborhood Boundaries and the Spatial Dynamics of Violent Crime

Promises and Pitfalls of Using Digital Traces for Demographic Research