In the present study, hydro-soluble copolymers of acrylamide with sulfonic groups have been synthesized using thermally initiated free-radical precipitation polymerization in Ethanol. The considered monomer in this study is Sodium Allyl Sulfonate (SAS), which is the sodium salt of allyl sulfonic acid and belongs to the polyelectrolytes group. SAS is an ionic monomer, which can easily be dissociated in polar media to produce mobile ions. Mobile ions create an osmotic pressure difference between the polymer and the solvent phase resulting in the swelling enhancement. This behavior is known as polyelectrolyte effect. Acrylamide (AM) is another monomer used in this study. A new innovation of our study is the preparation and investigation of rheological properties of poly (AM-SAS) in the precipitation polymerization. 1-6 Hexandiol diacrylate (HDDA) and 2, 2′-azobis isobutyronitrile were considered as cross-linker and initiator, respectively. The effects of (HDDA) concentration and mol fraction of sodium allyl sulfonate comonomer (SAS) on the properties of microgels (i.e., spectral characteristics, glass transition temperature, equilibrium swelling, gel content and rheological properties) were also investigated. The rubber elasticity theory was applied to discuss the network structure of microgel. Apparent and rotational viscosities were used to determine the optimal cross-linker concentration and mole fraction of SAS. Despite of our prediction, SAS monomer not only enhance the rheological properties of microgels but also cause to reduce considerably gel content, swelling, viscosity and rheological properties of PAM microgels. 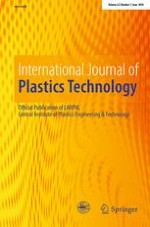 A note on using VOF method for polymer bead manufacturing