The Swift test was originally proposed as a formability test to reproduce the conditions observed in deep drawing operations. This test consists on forming a cylindrical cup from a circular blank, using a flat bottom cylindrical punch and has been extensively studied using both analytical and numerical methods. This test can also be combined with the Demeri test, which consists in cutting a ring from the wall of a cylindrical cup, in order to open it afterwards to measure the springback. This combination allows their use as benchmark test, in order to improve the knowledge concerning the numerical simulation models, through the comparison between experimental and numerical results. The focus of this study is the experimental and numerical analyses of the Swift cup test, followed by the Demeri test, performed with an AA5754-O alloy at room temperature. In this context, a detailed analysis of the punch force evolution, the thickness evolution along the cup wall, the earing profile, the strain paths and their evolution and the ring opening is performed. The numerical simulation is performed using the finite element code ABAQUS, with solid and solid-shell elements, in order to compare the computational efficiency of these type of elements. The results show that the solid-shell element is more cost-effective than the solid, presenting global accurate predictions, excepted for the thinning zones. Both the von Mises and the Hill48 yield criteria predict the strain distributions in the final cup quite accurately. However, improved knowledge concerning the stress states is still required, because the Hill48 criterion showed difficulties in the correct prediction of the springback, whatever the type of finite element adopted. 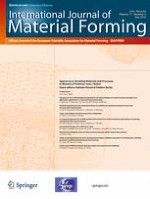 Comparison of 2 methodologies developed for the determination of residual stresses through X-ray diffraction: application to a textured hcp titanium alloy