Habrobracon hebetor (Hymenoptera: Braconidae) is a parasitoid that interferes with the rearing and mass production of Anagasta (= Ephestia) kuehniella, causing economic losses to laboratories and research centers. Although H. hebetor can parasitize insect crop pests, a lack of information on its parasitoid activity on different hosts limits understanding of the paralyzing process, which involves injection of venom to induce host paralysis. We investigated whether hosts selected according to the efficiency of paralysis by H. hebetor were effectively parasitized. We performed an experiment offering 13 different insect pest species from four families (Pyralidae, Erebidae, Noctuidae, and Crambidae) to H. hebetor. We selected the four hosts that were paralyzed in the highest proportions and most rapidly: Diatraea saccharalis, Agrotis ipsilon, Spodoptera cosmioides, and A. kuehniella. We investigated parasitism by H. hebetor, based on the biological parameters of the ectoparasitoid on each host and the respective functional response models. We observed a type II functional response for all alternative hosts tested, which is usual in parasitoid-host relationships. However, H. hebetor was not able to complete its life cycle on A. ipsilon, indicating that paralysis efficacy is a poor criterion to identify potential hosts for parasitism. In the other words, the viability of H. hebetor and the attack rate were highest on D. saccharalis, indicating that this natural enemy might be useful for the biological control of this pest.
Anzeige 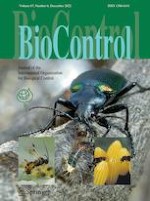 Ground-covers affect the activity density of ground-dwelling predators and their impact on the Mediterranean fruit fly, Ceratitis capitata

Effect of temperature on survival of Australian entomopathogenic nematodes and their virulence against the Queensland fruit fly, Bactrocera tryoni