The paper analyzes the case of K distributed interference coupled point-to-point links, which utilize a general power update algorithm, which converges monotonically. The channels are constant for the duration of the algorithm. In such a system we allow a set of links to have the ability to misrepresent their utilities, i.e. the receiver sends a misrepresented utility to its transmitter. It is shown that the system, i.e., the set of correctly behaving links, has the ability to detect such a behavior, if and only if G Restricted is irreducible. Here G Restricted is the restricted global dependency matrix, which captures the effect of interference coupling in the system. We then analyze the special case of the Foschini-Miljanic power update algorithm. After at most K − 1 steps, all links are able to detect the misbehavior. Example interference networks are discussed to illustrate the results. Finally the applicability of the results to the practically relevant cases of concave, convex and log-convex interference functions is displayed. 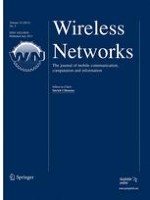 Construction and maintenance of virtual backbone in wireless networks