This paper proposes a fuzzy logic inference system that can predict the carbon fiber (CF)/polypropylene (PP) hybrid composite’s shrinkage in the injection molding process. Five factors, wt.% of CF, injection speed, packing pressure, packing time, and melt temperature, were chosen to conduct design of experiments. Based on the Taguchi and analysis of variance methods, wt.% of CF, injection speed, and melt temperature were found as top three ranks that have significant effect on the shrinkage values. Therefore, these three parameters were used as the input variables of the system, while the shrinkage was the only one output variable. Membership functions and rule bank were constructed based on both the experiences and experimental data. The results predicted by this fuzzy logic inference system showed more than 99% accuracy compared to both experiment data and validation testing data. So, this system is capable of predicting CF/PP hybrid composite’s shrinkage when wt.% of CF, injection speed, and melt temperature are decided. 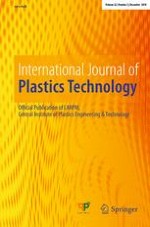