This study aimed to develop a social cohesion index for understanding the social relation between residents in high-rise group housing complexes through a self-reported questionnaire. As a background of the study, literature on social cohesion and related literature on residents’ social relation in high-rise housing were reviewed. Later, we selected different high-rise group housings of Kolkata, a city in the eastern region of India. We conducted few focus group surveys involving the residents of those high-rises and also conducted expert opinion surveys to identify a context-specific list of statements for evaluating residential social cohesion. Finally, based on the responses of interviews from 652 residents of the identified high-rise housings from the same city, followed by confirmatory factor analyses, three factors of residential social cohesion were identified with adequate reliability and validity. This index holds huge potential to explore residential social relation in high-rise housing and carry out empirical studies, across various disciplines, in other cities in the country and outside the country of similar socio-economic and cultural context. 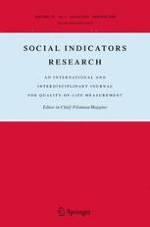 Sense of Community and the Perception of the Socio-Physical Environment: A Comparison Between Urban Centers of Different Sizes Across Europe

Socioeconomic Inequalities in Infant Mortality in Egypt: Analyzing Trends Between 1995 and 2014