A challenging issue in optimal allocating water resources is uncertainty in parameters of a model. In this paper, a fuzzy multi-objective model was proposed to maximize the economic benefits of consumers and to optimize the allocation of surface and groundwater resources used for optimal cropping pattern. In the proposed model, three objective functions were optimizing farmer’s maximum net profit, groundwater stability and maximizing the reliability of water supply considering uncertainties in water resources and economic parameters in a basin. The optimal Pareto trade-off curves extracted using Non-dominated Sorting Genetic Algorithm- II. The best point on the Pareto trade-off curves was determined by using five decision-making approaches which combined by Breda aggregation method. Then, analyzing the credibility level of the optimization parameters and nonlinearity condition of objective functions revealed that by non-linearization of objective functions and increasing the fuzziness of the water demand and economic parameters, the model achieves more desirable values. Having been applied under uncertain conditions of objective functions and the input parameters, the results indicate an average increase of 17% and 54% in the allocation of agriculture and urban sectors, respectively. According to the annually optimal allocation results, the groundwater resources show higher sensitivity rather than surface water resources to the uncertainties in the parameters. Moreover, the optimal operation policies are more efficient than the deterministic model Consequently, the suggested model can facilitate optimizing water resources allocation policies, providing the optimal cropping pattern under uncertainty conditions, and can be used for the similar uncertain condition in other basins. 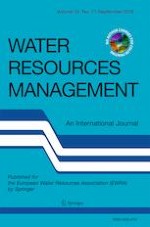 A Two-Stage Stochastic Optimization for Robust Operation of Multipurpose Reservoirs