We report on the development of process capabilities for a polymer-based, multi-layer microelectrofluidic platform, namely: the hot embossing process, metallization on polymer and polymer bonding. Hot embossing experiments were conducted to look at the effects of load applied, embossing temperature and embossing time on the fidelity of line arrays representing micro channels. The results revealed that the embossing temperature was a more sensitive parameter than the others due to its large effect on the polymer material’s viscoelastic properties. Dynamic mechanical analysis (DMA) conducted on polymethyl methacrylate (PMMA) revealed a steep glass transition over a 20°C range, with the material losing more than 95% of its storage modulus. The data explained the hot embossing results, which showed large changes in the embossed channel dimensions when the temperature was within the glass transition range. It was demonstrated that the micro-printing of silver epoxy was a possible low-cost technique in the mass production of disposable lab chips. An interconnecting, three-dimensional network of electrical traces was fabricated, as well as a microfluidic device with interconnecting, three-dimensional network of micro channels. 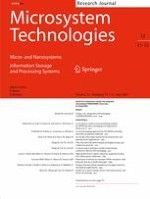