In this paper, the investigation of thin flash generation in precision forging process of an aluminum long flat part is described. The aim was to derive a predictive simulation method for thin flash generation in order to increase both process and part quality in the future. The forging processes were varied by use of different preforms with equal volumes but different mass distributions while using the same final part geometry. The experimentally forged parts were analyzed concerning the amount and part area of the generated thin flash. The conducted FE simulations were analyzed concerning the hydrostatic pressure values p in the part areas near to the tool gap between upper and lower die immediately before form-filling. For a more detailed comparison, single p values were included to hydrostatic pressure functions P. The comparison between the P functions and the experimentally determined thin flash height shows, that high pressure values as well as high gradients of the P functions indicate less thin flash generation. The method therefore allows a qualitative prediction of thin flash generation. It can provide two kind of information. First: The prediction of the specific locations where thin flash is likely to occur in one final part by use of one single preform. Second: The qualitative prediction of the specific final part areas were thin flash is likely to occur depending on different preform geometries. This method will decreases the necessity of time-consuming forging trials and can shorten the preform designing process in the future. 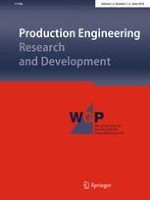 A design approach for the development of flexible production machines

Evaluation of the total cutting force in drilling of CFRP: a novel experimental method for the analysis of the cutting mechanism