Many real-world problems can be seen as constrained nonlinear optimization problems (CNOP). These problems are relevant because they frequently appear in many industry and science fields, promoting, in the last decades, the design and development of many algorithms for solving CNOP. In this paper, seven hybrids techniques, based on particle swarm optimization, the method of musical composition and differential evolution, as well as a new fitness function formulation used to guide the search, are presented. In order to prove the performance of these techniques, twenty-four benchmark CNOP were used. The experimental results showed that the proposed hybrid techniques are competitive, since their behavior is similar to that observed for several methods reported in the specialized literature. More remarkably, new best known are identified for some test instances. 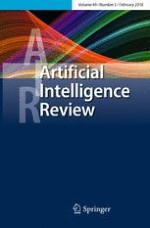 A review of adaptive online learning for artificial neural networks

A metamodeling approach for the identification of organizational smells in multi-agent systems: application to ASPECS