Research efforts, in the area of virtual reality, have mostly concentrated on the design and implementation of devices supporting user presence in immersive environments. Much can be done, however, to further improve the experience of wearing a head mounted display, in order to forget being at home while playing a computer game or navigating a virtual environment. In fact, with the widespread availability, in the near future, of head mounted displays (such as oculus rift) not only the power of gaming platforms will increase, but also the support to the construction of graphical user interfaces, which more closely resemble reality. Hence, although it may be exciting to navigate a virtual space wearing a head mounted display, user presence still depends on the functional fidelity of virtual objects. Simply said, presence perception is highly influenced by the opportunity of interacting realistically with the environment at hand. Hence, many graphical user interface (GUI) components should be re-engineered adopting a diegetic approach, as simple adaptations may result unnatural, awkward or out of place. Such fact, urges, for example, re-thinking how users receive and interact with information in virtual worlds. Along this direction of work, this contribution moves a step forward analyzing the role of diegetic interfaces. In particular, it describes the design, the implementation and the performance, to the eyes of its users, of three different diegetic interfaces, tested utilizing the oculus rift display. The results that are here presented, although referring to three specific cases, are of wider scope as they have been obtained for two GUI components that are adopted throughout many different entertainment virtual environments, namely a shell and a global control interface. 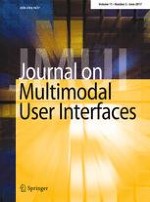 An insight into assistive technology for the visually impaired and blind people: state-of-the-art and future trends