Optimal user selection is important in increasing the capacity of Multi-User Multi-Input Multi-Output Wi-Fi networks, yet it faces a significant challenge; the multi-user diversity gain can be overwhelmed by the formidable Channel State Information (CSI) acquisition overhead. To lessen the overhead, existing schemes adopt the greedy user selection which generally takes the projected norm as the user selection metric, since it considers both the channel power gain and the orthogonality. However, the projected norm suffers from occasional poor user selection, since it does not take the optimal sum capacity gain into account. This paper proposes a new distributed user selection protocol called DiFuse. To employ the sum capacity gain as the user selection metric in DiFuse, each user cleverly computes its own estimated capacity gain by overhearing the CSI feedback from others. The users then simultaneously transmit their feedbacks at the frequency domain via the distributed feedback contention, which effectively reduces the feedback overhead. Then the AP collectively utilizes them for user selection that achieves the maximum positive increment to the sum capacity gain. We implemented the prototype of DiFuse on the USRP N210, and evaluated its performance via both testbed experiments and trace-driven emulations. The results showed that DiFuse outperforms the throughput of the existing scheme called OPUS by 1.8\({\times }\) on average, while maintaining better fairness. 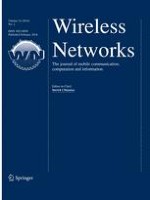 A novel approach for mitigating gray hole attack in MANET