Conventional needle-based approaches in intravitreal drug delivery carry needle-stick-injury risk and could scare patients (belonephobia). Alternatively, our group has explored the application of an electromagnetic needleless injector in this paper. This work aims to improve intravitreal drug delivery, which in the future could assist physicians with automation and benefit patients by providing a needleless approach. Electromagnetic needleless intravitreal injections lack quantification studies. We investigate the delivery properties of the needleless injector where the characterization can be used to refine the design parameters of the prototype in subsequent iterations. Experiments were performed to characterize the injectant delivered from the electromagnetic needleless injector. Penetration tests were conducted to observe the influences of various injection barriers and tissues. Ultrasonic imaging modality was explored for future applications of the prototype. The dispersion of the injectant was controllable where injection depth and distribution is dependent on the input voltage. The synthetic barriers highlighted significant energy losses for penetration (maximum velocity falls from 4.46 to 1.57 mm/s with a 0.1-mm barrier). The biological barriers were difficult to penetrate with the current prototype. Our results indicate that the current electromagnetic injector offers controllable dispersion (depth and distribution) correlated with input voltages, which should have increased injection power for use with biological tissue. Ultrasonic imaging modality produced velocity profiles comparable to the optical approach which is promising for future in vivo studies. The influences of injection barriers should be further investigated in in vivo experiments with ultrasonic imaging modalities.
× 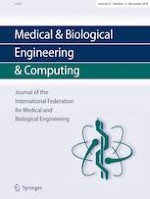