This paper provides a theoretical explanation as to why breakthrough innovations seem to be possible only within capitalist economies (Kornai in Dynamism, rivalry, and the surplus economy: Two essays on the nature of capitalism, Oxford University Press, Oxford, 2013). Specifically, our theory explains why disruptive innovations are discovered and financed by large numbers of independently owned small firms in capitalist economies rather than in socialist economies where state ownership is the only option. The key is that the ownership structure of the firm affects the ex-post selection of worthwhile discoveries, which determines the fate of disruptive innovation. Our paper also contributes to empirical work on disruptive innovation, which is missing in the literature. We use new molecular entities (NMEs) in the pharmaceutical industry as a proxy for disruptive innovation. Although pharmaceutical companies are often very large, their R&D projects greatly depend on forming alliances with much smaller independent firms. We find that the number of NMEs discovered by pharmaceutical companies is positively and significantly associated with the number of R&D alliances in which they participate. Our theory is supported by the empirical findings. 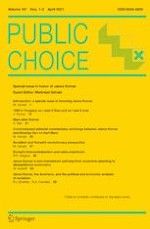