Single-qubit dissipative and non-dissipative channels, set in the general scenario of a system’s interaction with a squeezed thermal bath, are compared in the Choi isomorphism framework, to bring out their contrasting rank and geometric properties. The equivalence of commutativity between the signal states and the Kraus operators to that between the system and interaction Hamiltonian, and thus to non-dissipativeness, is pointed out. Two distinct unitarily equivalent Kraus representations of the dissipative channel, one based on the Choi isomorphism, and the other based on an ansatz, are used to illustrate that the orthogonality of Kraus operators under the Hilbert–Schmidt inner product is not a unitary invariant. Unlike the non-dissipative (Pauli) channels, the dissipative (squeezed generalized amplitude damping) channels do not form a convex set. Further, whereas the rank of Pauli channels can be any positive integer up to 4, that of the amplitude damping ones is either 2 or 4. In the latter case, a noise range is identified where environmental squeezing counteracts the effect of thermal decoherence. 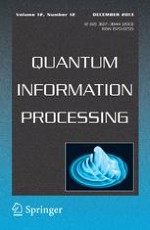 A SWAP gate for qudits