The interface microstructures as well as the rate kinetics of dissolution and intermetallic compound (IMC) layer formation were investigated for couples formed between molten 63Sn-37Pb (wt pct) solder and 99.9 pct Pd sheet. The solder bath temperatures were 488 K to 593 K (215 °C to 320 °C), and the immersion times were 5, 15, 30, 60, 120, and 240 seconds. The predominant IMC phases were Pd(Sn, Pb)4, PdSn4, and PdSn3. The IMC layer microstructure contained these phases and varying amounts of solder Pb- and Sn-rich phases. Isolated Pd-Sn needles appeared in the solder field at temperatures and times of ≥563 K (290 °C) and ≥30 seconds, respectively. Palladium dissolution was largely monotonic as a function of time and solder temperature, except for a sharp decline at 593 K (320 °C). The dissolution rate kinetics over 488 K to 563 K (215 °C to 290 °C) were represented by the At n exp(−ΔH/RT) equation. The values of n and ΔH were 0.67 ± 0.19 and 48 ± 20 kJ/mol, respectively, suggesting that a combination of interface reaction and solid-state mass transport processes controlled dissolution. The IMC layer grew monotonically with time and solder temperature, except at 593 K (320 °C) where growth dropped off significantly. The IMC growth rate kinetics over 488 K to 563 K (215 °C to 290 °C) exhibited values of n and ΔH equal to 0.88 ± 0.10 and 64 ± 10 kJ/mol, respectively, indicating a combination of interface reaction and solid-state diffusion processes. The extents of Pd dissolution and IMC layer development were significantly greater for molten Sn-Pb solder than the Pb-free Sn-Ag-Cu solder (Part I study) at a given test temperature. 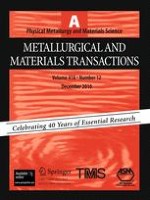 Simulation of Stresses during Casting of Binary Magnesium-Aluminum Alloys

A Conversional Model for Austenite Formation in Hypereutectoid Steels