In wireless multi-hop and ad-hoc networks, minimizing power consumption and at the same time maintaining desired properties of the network topology is of prime importance. In this work, we present a distributed algorithm for assigning minimum possible power to all the nodes in a static wireless network such that the resultant network topology is k-connected. In this algorithm, a node collects the location and maximum power information from all nodes in its vicinity, and then adjusts the power of these nodes in such a way that it can reach all of them through k optimal vertex-disjoint paths. The algorithm ensures k-connectivity in the final topology provided the topology induced when all nodes transmit with their maximum power is k-connected. We extend our topology control algorithm from static networks to networks having mobile nodes. We present proof of correctness for our algorithm for both static and mobile scenarios, and through extensive simulation we present its behavior. 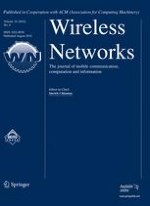