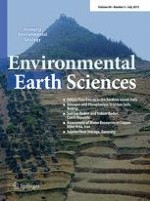 Interaction of longitudinal surface settlements for twin tunnels in shallow and soft soils: the case of Istanbul Metro