The online version of this article (https://​doi.​org/​10.​1007/​s11252-018-0819-x) contains supplementary material, which is available to authorized users.
Gábor L. Lövei and Roland Horváth contributed equally to this work.

We studied the effects on spiders of a three-step rural-urban urbanisation gradient near a Danish town embedded in a historically forested landscape. Using pitfall traps set in forested habitat patches, we collected a total of 3075 adult spiders of 80 species; the habitats under different degrees of urbanisation had 45–47 species. We found support for Gray’s Increasing Disturbance Hypothesis: the species richness trap−1 was significantly higher in the rural habitat than in any other one, and decreased from the rural forest to forest fragments dominated by non-native trees in the urban park. The number of forest specialist species also decreased along the urbanisation gradient. Neither the presence of generalists nor light-preferring species increased under more urbanised conditions, but web builders and hygrophilous species were more species-rich in the rural habitat than elsewhere. Using indicator values, we identified Coelotes atropos, Walckenaeria corniculans, Walckenaeria cucullata, and Pachygnatha listeri as species linked to the rural and suburban habitats; Trochosa terricola, Saaristoa abnormis, Robertus lividus as characteristic of the rural habitat; and Gongylidium rufipes and Diplocephalus latifrons as urban habitat specialists. 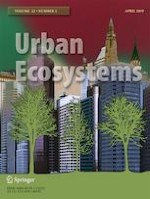 An increase in song pitch of eastern great tits (Parus minor) in response to urban noise at Seoul, Korea

Loss of urban forest canopy and the effects on neighborhood soundscapes

Engaging urban nature: improving our understanding of public perceptions of the role of biodiversity in cities

Short-distance pollen dispersal by bats in an urban setting: monitoring the movement of a vertebrate pollinator through fluorescent dyes

Evaluating the dependence of urban pollinators on ornamental, non-native, and ‘weedy’ floral resources