The Palearctic forest-steppe biome is a narrow vegetation zone between the temperate forest and steppe biomes, which provides important habitats for many endangered species and represents an important hotspot of biodiversity. Although the number of studies on forest–grassland mosaics is increasing, information currently available about the general compositional and structural patterns of Eurasian forest-steppes is scarce. Our study aimed to compare the habitat structure, species composition and diversity patterns of two distant sandy forest-steppes of Eurasia. We compared 72 relevés made in the main habitat components (forest, forest edge and grassland) of sandy forest-steppes in three Hungarian and three Kazakh sites. The size of the plots was 25 m2. Species number, Shannon diversity and species evenness values were calculated for each plot. Fidelity calculations and linear mixed effects models were used for the analyses. We found that the vegetation and diversity patterns of the two forest-steppes are similar and their components play important roles in maintaining landscape-scale diversity. Despite the higher species richness in Hungary, Shannon diversity was higher in Kazakhstan. The deciduous forest edges of both areas had significantly higher species richness than the neighbouring habitats (forests and grasslands); therefore they can be considered local biodiversity hotspots. Due to the special characteristics of this vegetation complex, we emphasize the high conservation value of all landscape components as a coherent system throughout the entire range of the Eurasian forest-steppe biome. 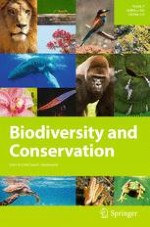 The wildlife snaring crisis: an insidious and pervasive threat to biodiversity in Southeast Asia