Do Computers "Have Syntax, But No Semantics"? | springerprofessional.de Skip to main content
TOOLBAR 1 2 3 4
SUCHE MENÜ 1 2 3 4

The heyday of discussions initiated by Searle's claim that computers have syntax, but no semantics has now past, yet philosophers and scientists still tend to frame their views on artificial intelligence in terms of syntax and semantics. In this paper I do not intend to take part in these discussions; my aim is more fundamental, viz. to ask what claims about syntax and semantics in this context can mean in the first place. And I argue that their sense is so unclear that that their ability to act as markers within any disputes on artificial intelligence is severely compromised; and hence that their employment brings us nothing more than an illusion of explanation.

Titel
Do Computers "Have Syntax, But No Semantics"?
Autor:
Jaroslav Peregrin 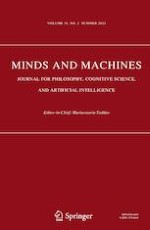 The Missing Ingredient in the Case for Regulating Big Tech