Most studies about the impact of urbanization on bird assemblages are from the Northern Hemisphere and most previous research has reported that cities reduced bird species richness and favored the settlement of exotic bird species. However, most of these studies took place in large cities and few of them were focused on riparian environments. The aim of our study was to investigate how richness and abundance of riparian birds change along the urban-rural gradient of Esquel, a small city in Patagonia. We established two rural riparian sites upstream, two urban riparian sites and two rural riparian sites downstream, and set up six point counts in each site. We counted birds twice (once in November 2013 and January 2014) and sampled vegetation coverage at each point count location. We used GLMMs to analyze data. Bird species richness decreased from rural to urban sites while bird abundance increased. Omnivores thrived in the city whereas insectivores and insectivore-frugivores were abundant in rural sites. Birds species richness was associated with plant species richness, while abundances of insectivores and insectivore-frugivores birds were related to shrub coverage and foliage height diversity. Our study highlighted that small cities can modify bird communities in the same way as large cities, thus policies for conservation of birds should be created to coincide with urbanizations. We recommend planting native species in all urban green spaces and informing citizens about the benefits of this action. If everybody collaborates, conservation of native birds in developing areas of Andean Patagonia will be possible. 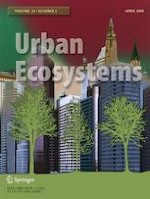 Analysis of the spread of Rhynchophorus ferrugineus in an urban area, using GIS techniques: a study case in Central Italy

Where the wild things are! Do urban green spaces with greater avian biodiversity promote more positive emotions in humans?