Existing research suggests that female-owned firms are not as successful as those owned by men. However, there is a distinct possibility that the performance measures employed in these studies have failed to control for the level of heterogeneity that may be inherent in the firms that were assessed during these studies. This study employed a matched sample approach to determine whether gaps in success, such as survival rate, outcomes, growth, and financial capital injection, between male- and female-owned businesses are eradicated when heterogeneity is controlled for within the models employed. We matched 430 female-owned business with male-owned equivalents that had the same human capital profile in terms of age, level of education, experience, and race; the same working preferences in terms of factors such as number of hours worked per week and whether the business was run from home or an office; and the same industry in terms of high-tech, medium-tech and non-tech. We found that female-owned firms have the same rate of survival as their male-owned counterparts and that the growth rate exhibited by female-owned businesses in terms of factors such as total assets, employment, profit, and sales, is the equivalent of male-owned firms. We did not detect any gender gaps in terms of business performance. Furthermore, the results indicated that, while the firms that are started by women start smaller and stay smaller, they do not lag behind those started by males in terms of business performance. The findings of this research hold particular interest for scholars, researchers, policy makers, investors, and financiers. Above all else, they should offer women who are considering commencing their own venture some confidence that they have the same chance of succeeding as their male counterparts.

Titel
Do women lag behind men? A matched-sample analysis of the dynamics of gender gaps
Autoren:
Joseph Farhat
Naranchimeg Mijid 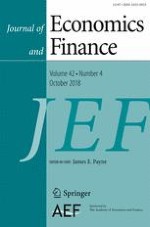 Electrification, the Smoot-Hawley tariff bill and the stock market boom and crash of 1929: evidence from longitudinal data