A large proportion of the environmental impacts of a technology is determined by decisions made at the early development stages. Therefore, effective approaches to grasp the potential environmental performance of a technology early in development are needed. This paper reflects on the usefulness of ex ante application of LCA using a case study on the appraisal of the potential environmental impacts of a lab-scale novel process for bioleaching of e-waste for metal recovery.

The LCA framework was applied at an early stage to the novel bioleaching process to embed it in a life cycle context, linking it to upstream and downstream flows. Then, a short-term future scaled-up scenario was defined using a proxy technology and estimated data. Environmental hotspots of this scenario were identified, and its environmental impacts were compared with those of a current industrial pyrometallurgical technique, involving an integrated smelter refinery.

LCA displays potential environmental hotspots related to energy and material inputs for the bioleaching process and solvents for copper recovery, despite uncertainties. Comparison with an existing integrated smelter refinery technology returned an inferior environmental performance. These results could not be considered accurate given the early-stage application, yet they served as valuable preliminary information. The uncertainties also prompted further enquiry about the chosen product system boundary, the role of the emerging technology and the comparability of the technologies.

The ex ante application of life cycle assessment on an emerging technology brings a systematic rigour and discipline to an ambiguous situation at the start of technological development. Applying the LCA framework broadens the scope of the research, introducing a systems approach and long-term view. Environmental aspects and alternative perspectives on the novel technology are also brought into the research domain. The approach creates new knowledge on the novel technology’s potential development, and developmental challenges are given definition at an early stage.
The LCA outcomes should not be regarded as a final result but have a signalling purpose as a contribution to technological development. Though imprecise with much conjecture involved, such an approach gives a valid mock-up of a plausible future providing useful provisional insights to be built upon. Applying ex ante LCA and an exploratory scenario to an emerging technology is of great service as a developmental design tool and can be further refined in later development stages. 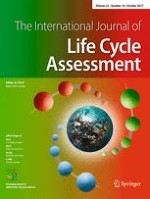 LCA of electricity networks: a review