Japan has more robots than any other country with robots contributing to many areas of society, including manufacturing, healthcare, and entertainment. However, few studies have examined Japanese attitudes toward robots, and none has used implicit measures. This study compares attitudes among the faculty of a US and a Japanese university. Although the Japanese faculty reported many more experiences with robots, implicit measures indicated both faculties had more pleasant associations with humans. In addition, although the US faculty reported people were more threatening than robots, implicit measures indicated both faculties associated weapons more strongly with robots than with humans. Despite the media’s hype about Japan’s robot ‘craze,’ response similarities suggest factors other than attitude better explain robot adoption. These include differences in history and religion, personal and human identity, economic structure, professional specialization, and government policy. Japanese robotics offers a unique reference from which other nations may learn. 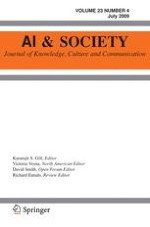 Empowering the users? A critical textual analysis of the role of users in open source software development

Would you mind being watched by machines? Privacy concerns in data mining

On mentoring, social mentoring and befriending