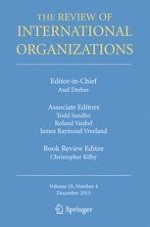 The domestic effectiveness of international human rights monitoring in established democracies. The case of the UN human rights treaty bodies

The preoccupation of the United Nations with Israel: Evidence and theory