The purpose of this study is to explore the effect of tax convexity on firms’ market risk, where tax convexity measures the progressivity of firms’ tax function. We examine the relation between equity beta and tax convexity based on a standard contingent-claims model, in which firms face nonlinear tax schedules. We verify that in the presence of default and growth options, the effect of tax convexity on beta is significant and depends on several countervailing forces. Tax convexity has a direct, positive effect on beta, as well as two indirect countereffects through default and growth options. The overall effect is ambiguous and quantitatively significant. As asymmetric tax schedules are used in most countries, assuming a linear tax schedule in the valuation framework may misestimate beta and thus fail to assess risk accurately. Our theoretical model shows that tax convexity should be taken into consideration when estimating equity beta. 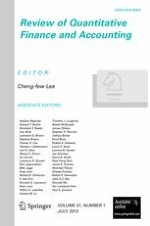 A trade-off between non-fundamental risk and incentives

Discretionary disclosure and the market reaction to restatements