Breast cancer patients undergoing radiation therapy can be treated using the 3D conformal or VMAT techniques. For both plans, the doses received by the target and the organs at risk are determined and compared with protocols recommended for the safety of the patients. CT simulations of 10 women with left breast cancer were used for a 3D conformal and VMAT treatment plans in the radiotherapy department of Ain Wazein Medical Village Hospital (AWMV) utilizing Monaco Treatment Planning system using Collapsed-cone and Monte Carlo algorithms respectively. The total prescribed dose to the PTV was 50 Gy in 25 fractions each 2 Gy. The dosimetric parameters obtained were mean, D95%, and homogeneity index for PTV; mean dose and max doses for the heart; the V20% for the left and the right lungs. All values of this retrospective study were analysed and compared to the normal tissue maximum dose tolerance. VMAT plans resulted in significantly better coverage for the target volume concepts as compared with 3D-CRT (D95: 97% vs. 82%, p-value = 0.002; Dmean 4953 cGy in 3D-CRT vs. 5093 cGy in VMAT, p-value = 0.01). The left lung (V20:28.44% with 3D-CRT vs. 21.93 with VMAT, p-value = 0.02). For the heart (Dmax = 4919 cGy in 3D-CRT vs. 4617 cGy in VMAT, p-value = 0.07). For the right lung (V20 was 0.12% in 3D-CRT vs. 0.52% in VMAT with p-value = 0.008). Even though the p-value was significant for the 3D conformal technique, the dose for both techniques was very low and non-significant to have a risk in the organ. The VMAT technique with correct target volume delineation allowed a significant dose escalation and an increase in Tumor Control Probability (TCP). VMAT resulted in an improved sparing of OARs as compared with 3D-CRT at equivalent dose levels.
Anzeige
Vorheriger Artikel Understanding current states of machine learning approaches in medical informatics: a systematic literature review
Nächster Artikel Usability of mobile phones for personal health care by people living with HIV/AIDS 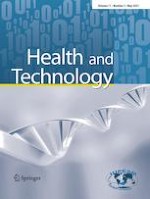 Exploring the acceptance of telehealth within palliative care: A self-determination theory perspective