First concerns about the use of nanosilver were raised almost a decade ago, but assessing the risks has been extremely challenging scientifically, and regulation to protect environmental and human health remains controversial. In order to understand the known risks and issues associated with the use of nanosilver, we carried out a DPSIR analysis and analysed drivers, pressures, state, impacts and potential policy responses. We found that most concerns relate to the potential development of multi-resistant bacteria and the environmental impacts of nanosilver. From the DPSIR analysis, we found that new (separate) legislation for nanomaterials in general and nanosilver-specific changes in the current European chemical, biocide and medical legislation were the optimal policy responses, along with limiting the overall use of nanosilver. In order to qualify the identified potential policy responses, we carried out a stakeholder analysis, in order to explore possibilities for reaching consensus amongst stakeholders. Through the stakeholder analysis, the interests, views, power and influence of the identified stakeholders were mapped. Overall, the policy options identified in the DPSIR analysis were deemed not to be implementable, as industry and NGOs seem to have fundamentally conflicting views and interests. The use of the combination of DPSIR and stakeholder analysis proved valuable for use in cases of complexity, as they compensate for each other’s limitations and open up for a discussion what can be done to reduce risks.

Titel
DPSIR and Stakeholder Analysis of the Use of Nanosilver
Autoren:
Steffen Foss Hansen
Anders Baun 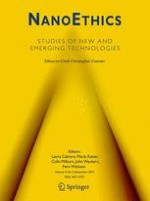 Logic of Choice or Logic of Care? Uncertainty, Technological Mediation and Responsible Innovation

Analyses of Acceptability Judgments Made Toward the Use of Nanocarrier-Based Targeted Drug Delivery: Interviews with Researchers and Research Trainees in the Field of New Technologies

Human, Non-Human, and Beyond: Cochlear Implants in Socio-Technological Environments