Drying dissipative patterns of the linear-type thermosensitive homopolymer poly(N-isopropylacrylamide) lpNIPAm in deionized aqueous solution and suspension were observed on a cover glass, a watch glass, and a Petri glass dish at 22 and 50 °C, respectively. The size and ζ potential of the globule aggregates of lpNIPAm at 47.5 °C were 140 nm in diameter and −22 mV from the electrophoretic light-scattering measurements. A single broad ring formed in the inner region (on a cover glass and a watch glass) and near the outside edge (in a glass dish) in the macroscopic drying pattern at 22 °C. On the other hand, two to three kinds of broad rings were observed at the outside edge and inner region at 50 °C. Microscopic drying structures of ordered rings, flickering ordered spoke-lines, and net structures of the agglomerated particles were observed. Formation of the similar-sized agglomerates and their ordered arrays were observed during the course of dryness. These results of lpNIPAm at 50 °C are quite similar to the agglomeration and the ordering of the thermosensitive gel spheres of poly(N-isopropylacrylamide), pNIPAm. The surface structures of the similar-sized agglomerates of lpNIPAm will be similar to those of pNIPAm gel spheres, since the chemical components of the homopolymers and the gels are almost the same. The role of the electrical double layers around the agglomerates and their interaction with the substrates are important for the ordering. Dendritic large aggregates (from 50 to 600 μm in size) formed in the presence of sodium chloride. 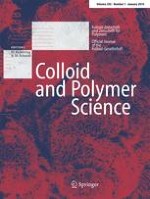