A new differential evolution algorithm with two dynamic speciation-based mutation strategies (DSM-DE) is proposed to solve single-objective optimization problems. An explorative mutation “DE/seeds-to-seeds” and an exploitative mutation “DE/seeds-to-rand” are employed simultaneously in DSM-DE in the evolutionary process. A Dynamic Speciation Technique is designed to assist the two mutations in order to utilize the potential of selective portioning of critical individuals in the population. It dynamically divides the population into numbers of species whilst taking species seeds as centers. The best individuals for each species are used as base vectors in each species in the proposed mutation strategies. “DE/seeds-to-seeds” selects individuals from species seeds and current species to constitute difference vectors whereas “DE/seeds-to-rand” selects from the whole population. Thus the two mutation strategies can accelerate the convergence process without decreasing diversity of the population. Comparison results with four classic DE variants, one state-of-art DE variant and two improved non-DE variants on CEC2014, CEC2015 benchmark, and Lennard-Jones potential problem reveal that the overall performance of DSM-DE is better than that of the other seven DE algorithms. In addition, experiments also substantiate the effectiveness and superiority of two seeds-guided mutation strategies in DSM-DE. 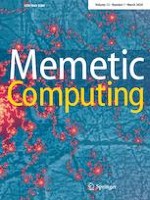 An Adaptive Island Evolutionary Algorithm for the berth scheduling problem