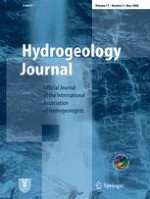 Reassessing the management of groundwater use from sandy aquifers: acidification and base cation depletion exacerbated by drought and groundwater withdrawal on the Gnangara Mound, Western Australia

Fractures, convection and underpressure: hydrogeology on the southern margin of the Piceance basin, west-central Colorado, USA

Sources of oxygen flux in groundwater during induced bank filtration at a site in Berlin, Germany

Modeling effects of nitrate from non-point sources on groundwater quality in an agricultural watershed in Prince Edward Island, Canada