As more renewable energy is integrated into the power grid, it is increasingly important to exploit variable electricity pricing structures to minimize commercial utility costs and enable more intermittent renewables on the grid through proactive management of energy storage. Using data from a large campus district energy system, equipped with centralized chilled water plants and a thermal energy storage tank, a novel technique is proposed to optimize this system in real-time, formulated as a mixed-integer quadratic programming problem. This method, titled Quadratic Programming Hybrid with Augmented Constraints, is sufficiently fast to be computed in real-time for a district chiller system. This method is compared to both Branch and Bound and a simple logical decision algorithm in both speed and optimality. The proposed method for solving this mixed-integer quadratic programming problem proves very successful at achieving a near-optimal solution when compared to a standard Branch and Bound (BnB) algorithm. Although suboptimal, the proposed algorithm takes 99.96–99.99% less computational time than the standard BnB and computes an answer to within 29.9% of the BnB objective function. When compared to a simple logical decision algorithm, which represents an operator manually controlling the plant, the proposed method is estimated to yield 8.10–33.7% in savings on chiller energy costs. The Quadratic Programming Hybrid with Augmented Constraints algorithm shows potential for use in a real-time optimization application to exploit variable electricity pricing and significantly reduce the costs of running a chiller plant with thermal energy storage. 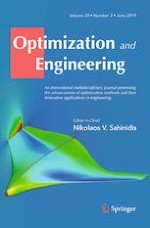 A twist on SLP algorithms for NLP and MINLP problems: an application to gas transmission networks

A review and comparison of solvers for convex MINLP