In India, competition scenario in the general insurance sector changed since the year 2000–2001 with the entry of several private sector players in the respective market. While a few studies attempted to benchmark the performance of Industry players using early data available from the market regulator, the existing research studies have a number of weaknesses. Against this backdrop, the present paper seeks to evaluate the performance of 15 general insurance companies for the period 2009–2010 to 2013–2014 using a two stage approach. In the first stage, the study uses the dynamic DEA model suggested by Tone and Tsutsui (Omega, 38(3–4):145–156, 2010) to evaluate the in-sample companies in terms of slacks based measure of technical efficiency. In the second stage, the efficiency scores have been explained by solvency performance of the insurers in terms of a panel data censored regression model with robust residuals. The results indicate a very strong association between efficiency and solvency. 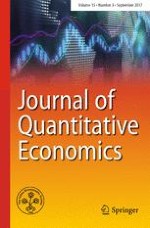 Do Technological Conditions of Production Explain Industrial Growth? The Indian Manufacturing, 1998–1999 to 2007–2008

Is the Hybrid New Keynesian Phillips Curve Stable? Evidence from Some Emerging Economies

The Economics of Child Labour in the Era of Globalization: Policy Issues By Sarbajit Chaudhuri and Jayanta Kumar Dwibedi Routledge, 2017