In this work we have characterised the viscoelastic behaviour of paraffin crystals in three different complex crude oils, close to the gelation threshold and after curing the gels under quiescent isothermal conditions, by means of oscillatory shear measurements. An increase in gelation temperature is observed with increasing oil’s molecular weight. The interactions between wax crystals and the formation of the space-filling network of interlocking wax crystals are thus facilitated by the presence of paraffins with higher molecular weight. The apparent gelation time, obtained from isothermal curing experiments, decreases as the curing temperature was decreased, and it is highly temperature-dependent.
The presence and the importance of the ageing of the wax were established under isothermal conditions. It must result from a coarsening of the crystallites presents in the oil and it is, more important, close to the gel point where its full development is very slow taking several days to occur. After ageing the gels, the connective domains or junction zones linking the crystal arrays fail when relatively small strains are applied to the system and the mechanical spectra of the gels reveal an imperfect elastic network, typical rheological characteristics of a particle gel. Despite the compositional differences among the samples, the similarity of their mechanical behaviour is quite remarkable indicating that in all cases the gel-like organisation of the waxy material results from the formation of identical structures in the different oils, which is related not only to the wax content but also to the presence of other material that may reduce the crystallinity of the structure.
The low fractal dimensionality obtained indicates elongated substructures. These results, together with the very high elastic modulus obtained at low volume fractions of crystallised material, are indicative of network structures with high degree of porosity: a lattice of wax crystals with large spaces among them filled by the oil and non-precipitated material. 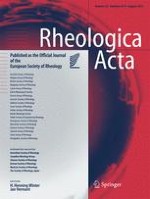 The rheology of two-dimensional foams