A novel contact-enhanced design of MEMS (micro-electro-mechanical system) inertial switch was proposed and modeled in Simulink®. The contact effect is improved by an easily realized modification on the traditional design, i.e. introducing a movable contact point between the movable electrode (proof mass) and the stationary electrode, therefore forming a dual mass-spring system. The focus of this paper is limited to a vertically driven unidirectional one for the purposes of demonstration, but this design concept and Simulink® model is universal for various kinds of inertial micro-switches. The dynamic simulation confirmed the contact-enhancing mechanism, showing that the switch-on time can be prolonged for the dynamic shock acceleration and the bouncing effect can be reduced for the quasi-static acceleration. The threshold acceleration of the inertial switch is determined by the proof mass-spring system’s natural frequency. Since the inertial switches were fabricated by the multilayer electroplating technology, the proof mass thickness were assigned two values, 100 and 50 μm, in order to get threshold levels of 56 and 133 g respectively for the dynamic acceleration of half-sine wave with 1 ms duration. Other factors that influence the dynamic response, such as the squeeze film damping and the contact point-spring system’s natural frequency were also discussed. The fabricated devices were characterized by the drop hammer experiment, and the results were in agreement with the simulation predictions. The switch-on time was prolonged to over 50 μs from the traditional design’s 10 μs, and could reach as long as 120 μs. Finally, alternative device configurations of the contact-enhancing mechanism were presented, including a laterally driven bidirectional inertial switch and a multidirectional one. 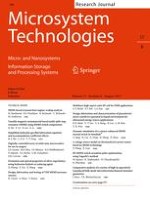 Digitally-controlled array of solid-state microcoolers for use in surgery