Gyroscopic effects are essential features for vibration analysis and design of rotating structures due to the variation of coordinate system and the presence of inertia force. The purpose of this study is to present a new topology optimization method for designing rotating beam cross-section with gyroscopic effects. Based on the Giavotto beam theory and Hamilton’s principle, the governing motion equations of a rotating beam with an arbitrary geometry section are derived first, and then the dynamic finite element models are formulated. The eigensolution of the rotating beam has complex eigenvalues due to the gyroscopic terms in the governing equations, and this work mainly concerns with the steady rotating state, in which the real parts of all complex eigenvalues equal to zero. Topology optimization models of the beam cross-section are formulated in the variable density frame and the objective is to maximize the fundamental eigenfrequency and the gap between two consecutive eigenfrequencies. In order to alleviate the non-differentiability of min-max problems, the Kreisselmeier-Steinhauser function is used to approximate the objective function. The sensitivities of eigenfrequencies with respect to design variables are derived in the complex space. Numerical examples show that the angular velocity has a significant influence on the optimal topology of the rotating beam cross-section, and also validate the effectiveness and necessity of the proposed method. 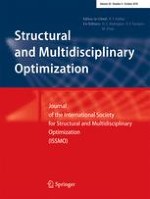