A dynamic modelling approach for a multi-beam structure connected with nonlinear joints is presented and subsequently used to obtain its reduced-order analytical model. Firstly, by applying the matching and boundary conditions, the natural frequencies and global mode shapes of the system are derived. According to the nonlinear transmitted torque formulations of the joints, the joints nonlinearities are introduced into the system by using the equilibrium conditions between the beams and the joints. Then, the global mode shapes and their orthogonality relations are used to obtain an explicit set of reduced-order nonlinear ordinary differential equations(ODEs) of motion for the flexible structure with nonlinear joints. A flexible structure composed of 4 beams and nonlinear joints is given as an example to illustrate the application of the modelling approach proposed. And a comparison between the natural frequencies obtained by the proposed approach and those from the finite element method is given to verify the validity of the derived model. Through the nonlinear ODEs obtained by the Galerkin truncation of the original dynamic model, a study on the variation in dynamic responses of the system with different numbers of modes is performed. The results are used to determine the number of modes taken in nonlinear vibration analysis for certain range of the vibration amplitude of the external excitation. The dynamic responses of the system with various joint parameters are worked out, which show that the transmission characteristics of the joints can strongly affect the dynamic behavior of the whole structure. 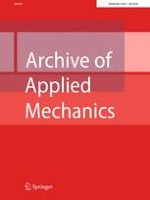 Stress–strain analysis of the antiplane shear problem for an infinite cylindrical inclusion with eigenstrain: an addendum to Arch. Appl. Mech. 2018