While economists have found a positive relationship between norms like generalized trust and economic growth, several scholars outside of economics have argued that there is a tradeoff between economic growth and morality. In particular, they argue that as markets develop, market values, e.g. a focus on money and material possessions, also increase. In this article we empirically test this claim using data from the Economic Freedom of the World project, the World Bank, and the World Values Surveys. Our findings suggest that countries with more economic freedom, i.e. those countries that embrace markets to a greater extent, are less materialistic. We also find that countries with a higher GDP per capita are correlated with less materialism. 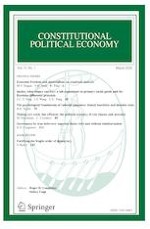 Justice, what money can buy: a lab experiment on primary social goods and the Rawlsian difference principle

Governance by true believers: supreme duties with and without totalitarianism

Making exit costly but efficient: the political economy of exit clauses and secession

Fortifying the fragile order of democracy