The concept of ecosystem goods and services is increasingly used to describe how biodiversity and ecosystems are linked to human well-being and that it should be placed at the core of sustainable urban development. Predictions of a tremendous future increase of urbanization in Africa necessitate an investigation into the research on ecosystem goods and services in the urban green infrastructure of Africa. Ecosystem goods and services (ES) are described as the benefits humans derive directly or indirectly from ecosystem functions and are classified as supporting, provisioning, regulating and cultural services. A literature study focusing on journal papers was conducted. Additionally a case study based on two masters studies was further refined. ES studies in African cities are biased towards South Africa and include assessments and economic valuations in which several different methods were used to determine direct consumptive and non-consumptive and indirect use values. Emphasis was placed on the multifunctional nature of ES. The main objectives of these studies were to sensitize policy makers, planners and the general public about the importance of biodiversity and ES. Ecosystem-based adaptation is discussed as the most appropriate approach in terms of applying knowledge about ES and their values in African cities as many residents still rely on ES from natural areas, but the major ecological, economic and political challenges are acknowledged. A case study focusing on domestic gardens (private green spaces) have indicated that the demand and supply of certain ES differ along a socio-economic gradient due to poor service delivery and smaller plots in the poorer areas mainly due to the legacy of separate development of the past. Where provisioning services are mainly outsourced in cities, it was found that plant species useful as food, medicine, etc. were more frequent in the gardens of poorer residents than in those of more affluent areas. The tendency to pay more for residential properties close to public open spaces, as in Europe, could not be statistically proven in the more affluent areas of a South African city, although the property values in proximity of public open spaces in some of the areas studied were lower than further away. 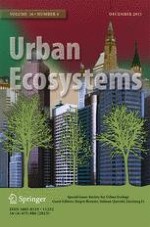 Assembling the pieces: a framework for the integration of multi-functional ecological main structure in the emerging urban region of Bogotá, Colombia