Prestress losses assumed for bridge girder design and deflection analyses are dependent on the concrete modulus of elasticity (MOE). Most design specifications, such as the American Association of State Highways and Transportation Officials (AASHTO) bridge specifications, contain a constant value for the MOE based on the unit weight of concrete and the concrete compressive strength at 28 days. It has been shown in the past that that the concrete MOE varies with the age of concrete. The purpose of this study was to evaluate the effect of a time-dependent and variable MOE on the prestress losses assumed for bridge girder design. For this purpose, three different variable MOE models from the literature were investigated: Dischinger (Der Bauingenieur 47/48(20):563–572, 1939a; Der Bauingenieur 5/6(20):53–63, 1939b; Der Bauingenieur, 21/22(20):286–437, 1939c), American Concrete Institute (ACI) 209 (Tech. Rep. ACI 209R-92, 1992) and CEB-FIP (CEB-FIP Model Code, 2010). A typical bridge layout for the Dallas, Texas, USA, area was assumed herein. A prestressed concrete beam design and analysis program from the Texas Department of Transportation (TxDOT) was utilized to determine the prestress losses. The values of the time dependent MOE and also specific prestress losses from each model were compared. The MOE predictions based on the ACI and the CEB-FIP models were close to each other; in long-term, they approach the constant AASHTO value. Dischinger’s model provides for higher MOE values. The elastic shortening and the long term losses from the variable MOE models are lower than that using a constant MOE up to deck casting time. In long term, the variable MOE-based losses approach that from the constant MOE predictions. The Dischinger model would result in more conservative girder design while the ACI and the CEB-FIP models would result in designs more consistent with the AASHTO approach. 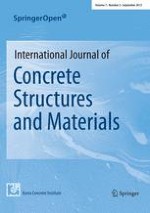 Erratum to: Tailoring ECC for Special Attributes: A Review